Reflections On The Concert From A Facilitator | JBCN International School Youtube

WICKED – Reflections on the Concert from a Facilitator 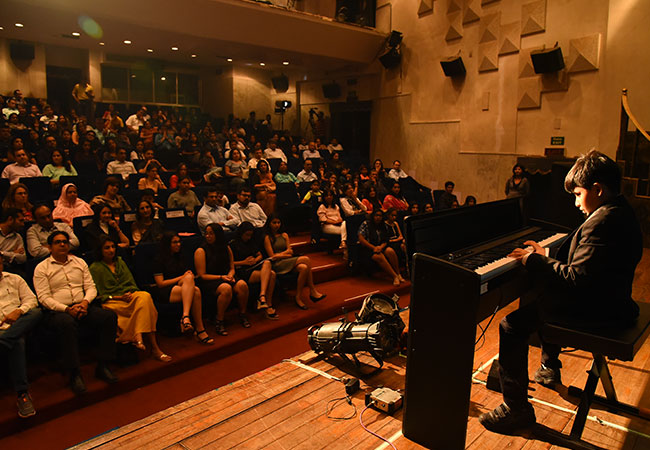 December 2017, senior students of the JBCN International School, Parel, teleported the highly successful Broadway musical, WICKED, to the Y B Chavan Centre in Mumbai. For almost two hours, parents and well-wishers of the school were treated to a stunning multi-media extravaganza that presented well-known characters from the well-loved children’s classic by L. Frank Baum – The Wonderful Wizard of Oz. However, in this adapted version of the tale, the protagonist, Dorothy, is relegated to a shadowy presence in the wings as the narrative unfolds from the perspective of the witches of Oz and recounts their ‘untold’ story.

Under the skilful direction of Mumbai’s renowned practitioners of children’s musical theatre, Vishal Asrani and JijiSubi, the stage at the venerable Y B Chavan Centre auditorium came alive with an explosion of sound, light and foot-tapping original music, along with stunning visual effects – including spectacular levitation scenes – and impressively mature theatrical performances from students of grades seven to ten – none of whom have been formally trained in dance or drama. The undeniable success of the event was the result of months of meticulous planning and preparation by the producer/directors and many long hours of intensive, disciplined rehearsals with the young thespians. As pointed out by Mr Kunal Dalal (MD, JBCN) in his introductory remarks, a theatrical production of this nature is in keeping with the school’s vision to provide its young learners with enriching creative experiences designed to support their personal and social development. Together with academic excellence, musical and theatrical experiences serve to facilitate the balanced and holistic Mind Body Soul development of learners as part of their EduCreative experience at the school.

At the outset, JijiSubi outlined the thinking that went into the selection of this particular musical event for the school’s annual drama presentation. He pointed out that the musical, apart from providing entertainment on a grand scale, had significant themes that indirectly influence children in a positive manner. At the core of the tale is an emphasis on the human values of personal integrity, tolerance and acceptance. Sprinkled throughout the narrative are associations and references to free speech, the rights of animals, and the ugliness of racial and other forms of discrimination. It is not surprising perhaps that the Broadway play has, in 2017, been voted by educators as the ‘Best Theatre Production for Schools’ for a second consecutive year at the in London. JijiSubi also pointed out that children were given an opportunity to learn the skills of effective vocal recording as all the dialogue for the play was pre-recorded in the voices of the actor. This brought an additional dimension to the learning experiences derived from the production.

“This experience allowed me to connect with my peers like I never had and motivated me to push my limits and do my best. It was definitely the highlight of this academic year!” – A JBCN Learner.